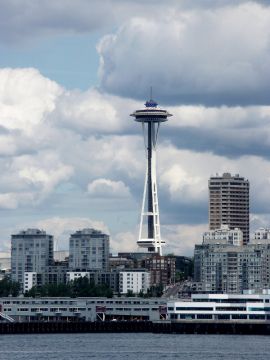 Seattle Center is more than just the city’s cultural center and much more than a grouping of entertainment venues and museums. The Center is the soul of the city. Here Seattle gathers to mourn (the victims of Sept 11, the deaths of Jimi Hendrix and Kurt Cobain) and to celebrate; festivals, sporting events, ethnic heritage and all the arts. The space occupied by the Center, including the Space Needle, was largely created for the 1962 World’s Fair, but the area has functioned as a civic center since the first auditorium was built in 1928. The Center House, which today holds an exhibition space, shops and a food court was built by the army in 1939 as an armory. The area was showing its age in the late 70’s and 80’s, but an revitalization program has brought it back to life. Today, in addition to the Space Needle, the Center is home to everything from a high school, museums, theaters, gardens, world class opera and ballet companies, to a kid’s amusement park, and the home court of Seattle’s NBA and WNBA teams. The Center is purportedly the 4th largest visitor center in the United States, and 82% of Seattleites report that they visit the Center on average, nine times a year. Ten thousand visitors pass through annually. There is no one way to see Center. Take your time and explore. Reflect by the fountain, see a photography exhibit or an IMAX movie, and ride the rollercoaster with your kid. The only thing really lacking is good food. Most of what you get on the Center grounds, except during the various festivals, is of the typical mall food court variety. The neighborhood around the Center, known as lower Queen Anne, is much better option for anything beyond a snack. 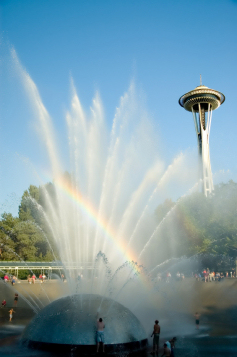 Location: The Center is located to the North of downtown Seattle, and covers 87 acres. It is bordered on the East and West by 1st Ave N, and 5th Ave N. and on the South and North by Denny St. and Mercer St. The best way to get there from downtown is via Seattle’s monorail, which carries visitors from Westlake Center to the Center for $.1.50. The monorail is closed for repairs during the summer of 2004, and has been replaced with a free shuttle bus which covers the same route. If you go by car, beware the one way streets. This neighborhood, known as lower Queen Anne, can be a hard place to find street parking. Try the official Center parking lots, along Mercer St. and Roy St. which are well marked, if a bit pricy. Highlights: Check out the maps posted at any of the entrances to Seattle Center – there are too many venues and exhibits to even begin to mention them all here. See a performance at one of the theaters, visit the Northwest Rooms to see native crafts, and relax in the Sculpture Garden. The list below represents only a few of the major venues at the Center. Space Needle: 203 6th Ave N The icon of Seattle has only been with us since 1962. The Needle, originally known as the Space Cage, was built by private investors for the 1962 World’s Fair. At the time, it was the tallest building West of Mississippi, displacing an older Seattle icon, the Smith Tower (located downtown) which had held that title since 1914. (Note that Smith Tower also has a much less well known and cheaper observation deck.) The Needle is 605 feet high, and houses an observation deck and a restaurant, called Sky City. Though Sky City is never on anyone’s list of the best places to eat in town, locals agree that it has improved in recent years, and the view that comes with your meal simply can’t be equaled elsewhere in the city. The Needle is still privately owned and run separately from the rest of Seattle Center, which is itself owned by the City. A campaign to restore and revitalize the Needle began in 1999. This was also the year the Needle officially became a city historical landmark. The view from the observation deck is stunning on a clear day – the panorama includes downtown, Elliot Bay, Lake Union, the Olympic Mountains, Mt Rainer and the Cascade foothills. The view is even labeled, so you don’t have to guess what you are looking at. Don’t worry if it’s windy; the Needle was built to withstand wind speeds of up to 105 miles per hour. If you are eating at Sky City your trip to the observation deck is free, otherwise you will pay an admission fee of $13 for your elevator ride. At night the price goes up to $17. The observation deck is open untill midnight. International Fountain: In the middle of the campus, off of Second Ave N. North of the Flag Pavilion. The fountain has been called Seattle’s front yard. Children play in the jets as water cascades in time to music. After 911 Seattleites gathered round the fountain and filled it with flowers in a spontaneous memorial to the victims of the attacks. The flowers were gathered and composted, and used in the planting of a memorial garden on the Center grounds. This is a great place to sit and relax on a sunny afternoon. The fountain was built for the 62’ World’s Fair, but was completely redesigned in 1995. 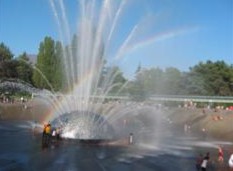 The full name of Seattle’s newest performing art’s center is Marion Oliver McCaw Hall. The Hall opened in 2003, and has been hailed as a huge success. It is home to both the Seattle Opera and the Pacific Norwest Ballet. Though the hall is only open for performances, you can glimpse the five story glass grand lobby through the windows. Outside the hall is a public courtyard, with a fascinating water sculpture that makes a great entry point to the Center itself. Seattle Children’s Museum: Located inside the Center House The Children’s museum is renowned for wowing kids and adults alike. With eight permanent exhibits, and numerous changing exhibits, the museum is very much a hands on experience. The museum strives to emphasize cultural diversity. If you have kids, allow a couple hours for this one. Admission is $7.50 for kids and adults alike. Center House 305 Harrison Street: The Center House’s main feature is a food court. A step up from what you might find at a mall, it still isn’t much to write home about. There are also some shops and an small exhibition space upstairs. This building has the easiest access public restrooms on the campus. Pacific Science Center: 200 Second Avenue N The Science Center has five buildings of science exhibits, an two IMAX theaters and a planetarium. Admission prices vary, by the package; general admission for adults is $10, with an IMAX movie the price goes up to $15. The Butterfly House is worth seeing but a lot of the regular exhibits are starting to show their age. Unless traveling with kids, or eager for an IMAX movie you may want to skip this one. Experience Music Project and the Science Fiction Museum: 325 5th Avenue N What Frank Gehry built for Seattle is nothing like his other renowned buildings (LA’s Disney Hall, or the Guggenheim Museum Bilbao, for example). It has to been seen to be believed. Opened in 2000, financed and run on Paul Allen’s (a Microsoft founder, and household name in Seattle) money, EMP is a must stop for the passionate rock and roll aficionado. Others may find the admission a bit steep, and the exhibits on the dull side. EMP has had better luck as a music venue than as a museum. In fact, in June of 2004 a new Science Fiction Museum opened inside what was formerly a part of EMP in an effort to attract more visitors. Adults pay 19.95 in admission to EMP, and for 26.95 get the Science Fiction Museum thrown in too. Major Festivals: Northwest Folk Life: held over Memorial Day Weekend every year. Free. Suggested donation of $5. Called the largest free festival of it’s kind on the West Coast, Folk Life is a celebration of music, dance, crafts, film and food. Bite of Seattle: mid July, a great chance to taste samples from many of Seattle’s Restaurants, for a reasonable price. Admission is free, with food prices for sampling plates from most of the participating restaurants held down to $5/plate. There are also always packaged food vendors, providing free samples of their products. Bumbershoot: Labor Day weekend. A music festival, and a long standing Northwest tradition. Bumbershoot is a slang term for umbrella, dating back to the 1890’s and the festival is Seattle’s whimsical way of welcoming back the rain. Single day tickets are priced at $25 for 2004, though they can be purchased online before the event for as low as $15. Main Stage (big name bands) events require a wrist band; these are passed out the day of the performance, on a first come, first served basis. Bumbershoot also includes comedy, theater performances, film, and kids activities. Contributing Editor: Lynn Marshall – Seattle, Washington