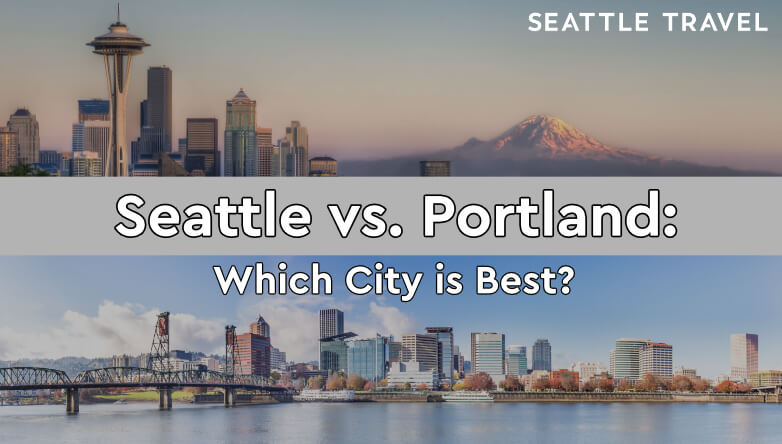 Seattle and Portland are two darlings of the Pacific Northwest. Both cities feature vibrant and unique cultures as well as rapidly growing populations. But which one is right for you? Let’s take a deep dive and analyze some of the differences between Portland and Seattle.

While Seattle and Portland are both overwhelmingly liberal, Portland is more communitarian while Seattle’s culture has a more libertarian emphasis. Basically, people in Portland believe more in the power of the collective rather than the individual. As a result, you’ll find plenty of co-housing and co-op living arrangements where responsibilities are diffused throughout the community.

Portland is also a very friendly place. While it’s known for being a hipster mecca, the people of Portland exude the stereotypical friendliness that one finds in the Pacific Northwest. But despite their friendliness, Portlandians will still strongly speak out when they sense injustice. In fact, Portlandians are often the first to protest over topics pertaining to inequality and the city has been nicknamed “Little Beirut”. Portland notably features one of the highest concentrations of progressives in the country.

Meanwhile, Seattle is perhaps a less friendly and more individualistic place. Seattle’s independent leanings were put on full display in Summer 2020 when protestors declared a part of Seattle as a self-governing “Autonomous Zone” without any official leaders. But perhaps this independence has its costs, as Seattle has a reputation for somewhat standoffish people who are not very friendly (AKA “The Seattle Freeze”).

You could even make the case that some of these cultural differences have had an impact on public policy. Historically in Oregon, people could not pump their own gas. The primary argument made in favor of this arrangement is to support the livelihoods of gas station attendants. Seattle features no such law, indicating that Seattle values independence more than Portland. The City of Portland also features superior public transportation when compared to Seattle, which is another sign of its greater community focus.

One thing people from both Seattle and Portland share is a love for the outdoors. While the Pacific Northwest doesn’t always deliver the best weather for outdoor activities, both destinations feature a population that loves to stay active. But if you really love the open water or boating, Seattle is probably your best bet as Portland only has a few rivers that pale in comparison to the Puget Sound.

Over the past few decades, Seattle has seen a proliferating number of “techies”, a group of affluent and mostly male technology workers. Some have felt that this group of transplants has produced some negative consequences. Examples of these complaints include rising housing costs, lack of cultural diversity, and lackluster social integration. Some have even boldly proclaimed that “Seattle is dead and Amazon killed it”. While that’s hyperbole, one should know that the tech industry is changing and shaping Seattle’s culture in a way that is not happening in Portland.

Lastly, Portland is much weirder than Seattle. With an unofficial motto of “Keep Portland Weird”, Portlandians embrace their eccentric tastes and interests. For instance, in Portland, you’ll find events like the PDX Adult Soap Box Derby, the World Naked Bike Ride, and glow in the dark mini-golf. Portland’s weirdness has also been extensively parodied in the television show Portlandia.