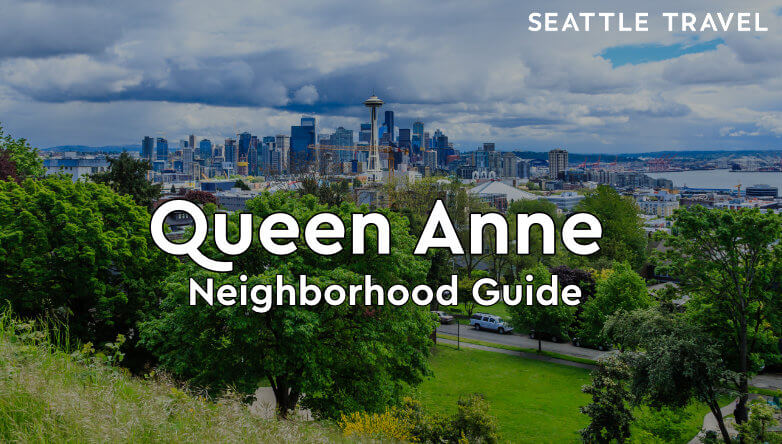 One of the most compelling reasons to live in Queen Anne is its breathtaking views. Queen Anne features striking views of the city and almost every natural landmark in the greater Seattle area, including Puget Sound, the Olympic Mountains, Mount Rainer, the Cascades, Lake Union, and Glacier Peak.

One of the best places to check out Seattle’s views is Kerry Park, a small park located on a cliff. Kerry Park (also called the Queen Anne Hill) offers a postcard-perfect view of the Downtown Seattle skyline and Space Needle.

Below, we’ll list some of the things to do in Queen Anne. Keep in mind most of these attractions are either near the Seattle Center in Lower Queen Anne or along Queen Anne Avenue, where all of the locally-owned shops and restaurants are located.

While the walk to the Space Needle is strenuous due to Queen Anne’s hilly terrain, it is incredibly rewarding. The Space Needle is one of the top tourist attractions in Seattle and offers a 520-feet observation deck that features 360-degree views of Seattle and some of Pacific Northwest’s natural landmarks.

Queen Anne’s western border is adjacent to Lake Union, where you’ll find ample opportunities for watersports and boating. You can also check out many of the houseboats that Seattle is famous for along Westlake Avenue!

If you’re a fan of Grey’s Anatomy fans, you should check out Dr. Meredith Grey’s house in Queen Anne. Keep in mind this house was only used for exterior shots, scenes weren’t actually filmed here! Here’s the address where you can check it out.

The Seattle Center is a hub for entertainment and arts in Seattle, with over 30 cultural and educational attractions. For example, in Lower Queen Anne, you’ll find Memorial Stadium, the Seattle Opera, the Pacific Science Center, the Museum of Pop Culture, and the Seattle Children’s Theatre. Many of the buildings at the Seattle Center were reused from when Seattle hosted the 1962 World’s Fair, producing a very unique mid-century aesthetic.

The typography of Queen Anne is incredibly hilly and is reminiscent of San Francisco. In fact, the steepest hill in Seattle is located in Queen Anne. The upside is that the challenging terrain makes the neighborhood a challenging cardio experience! Remember to wear appropriate shoes!

While Seattle is famous for its coffee, some of the best cafes are located in Queen Anne. Local favorites include Queen Anne Coffee Co, Milestead, and Storyville Coffee Company.

Queen Anne features a plethora of truly magnificent historic bungalows and craftsman style houses. The neighborhood was actually named after the Queen Anne architectural style due to its many homes that resemble the style.

Many people visit the neighborhood just to gawk at its notable architecture. Some of these homes also feature elaborate gardens, with neatly-trimmed walls of shrubbery that tower over those who walk by.

As you might expect, many of the homes in Queen Anne features sweeping panoramic views of Downtown Seattle, Puget Sound, and various mountain ranges.

Queen Anne has attracted an influx of affluent residents in recent decades, with many of Seattle’s elite calling it home. As a result, many of the early 20th-century bungalows have been replaced with contemporary mansions. However, some historic architecture still remains.

While most of Queen Anne is dominated by single-family residences, there are apartments, townhomes, and condos within the neighborhood.

If you like Queen Anne, chances are you’ll also like Magnolia, a similar neighborhood that is nearby.