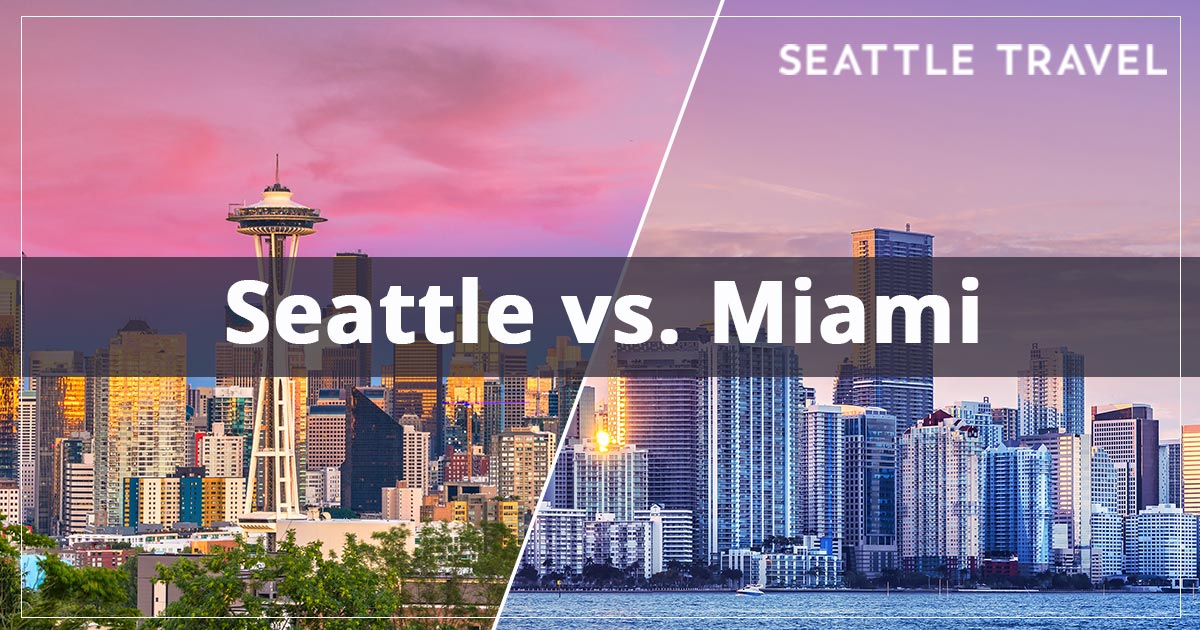 Seattle and Miami have both seen population explosions in recent years, as more and more people are drawn to these exciting and diverse cities. There’s a lot to love about both Seattle and Miami, but they’re very different. Each has its own unique vibe and character, and each offers a unique experience.

If you’re thinking about relocating to either Seattle or Miami, keep reading to find out which city might be best for you!

In terms of size, Seattle is substantially larger than Miami, covering an area of almost 84 square miles. Miami is rather more compact, clocking in at 55 square miles. That said, the metro area of each city covers roughly 6,000 square miles.

Both Miami and Seattle are home to a well-educated population, with over 30 percent of Miami residents holding a college degree and an impressive 64 percent of Seattle residents having completed their college education.

Politically, both Seattle and Miami are left-leaning, with a substantial majority of residents identifying as Democrat. This holds true for both the metro areas of both cities. However, Miami is known

Seattle and Miami are both exciting, vibrant, and friendly cities, and it’s easy to move to either and meet new people. Miami is a relaxed and welcoming place, thanks to its warm weather and beach-centric lifestyle. Although Seattle is also fairly relaxed and casual, warm days are fewer and farther between, so shorts and flip-flops aren’t always an option!

Complaining about traffic is all-too-common in every big city, and neither Seattle nor Miami escape from their fair share of gridlock and extended commute times. That said, both cities have excellent public transit options, and plenty of inner-city neighborhoods that are super-walkable. In Miami, neighborhoods like Brickell and Wynwood are ideal for those who would rather not own a car, and getting around by bus or train is easy and convenient. Seattle, too, has neighborhoods like Belltown and Fremont that are pedestrian- and cycle-friendly, and the city’s light rail system is constantly being expanded.

Both cities are extremely diverse, with an eclectic population of residents from all over the world. This exciting diversity is evident in all aspects of life, ranging from art and fashion to food and music, and adds to the cultural richness of both Seattle and Miami.

Residents of both Seattle and Miami have almost endless options when it comes to art and culture. Miami’s fascinating architectural heritage is evident at every turn, and its pastel-hued Art Deco and Miami-Modern buildings are as wonderful as you might imagine. There are museums throughout the city, including Pérez Art Museum and the Museum of Contemporary Art, and neighborhoods like Wynwood and the Design District are full of galleries and public art.

Seattle, too, is home to an impressive arts and culture scene, and there’s a quirky, off-beat current running throughout the many neighborhoods. There’s long been a thriving music scene in Seattle, and local and national acts can be found playing at one of the many live music venues on any given night of the week. Seattle is also home to some venerable institutions such as the Seattle Art Museum, the National Nordic Museum, and Benaroya Hall.

As you might expect, there are events and festivals throughout the year in both cities. Miami hosts an incredible selection of high-profile events such as Miami Fashion Week, Miami International Boat Show, and Miami Beach Pride. Seattle hosts a wonderful 24-day film festival each year, and draws thousands of people from all over the region for the annual Seafair celebrations.

When it comes to comparing the general cost of living in Seattle and Miami, we can get a clearer idea of the differences in several categories by looking at Wolfram Alpha’s cost of living index. A score of 100 represents the national average in each category:

As we can see from the table, the cost of living in Miami is substantially lower than in Seattle. The difference between the cost of housing in each city is quite staggering and supports Seattle’s reputation as one of the county’s most expensive cities. Still, to put things in perspective, New York’s overall score is 237 and San Francisco has a score of 192, both of which make the cost of living in Seattle appear much more reasonable.

As we’ve already seen, housing costs in Seattle are much higher than in Miami. Even though Miami has a high concentration of luxury real estate, including some of the most expensive properties in the world, purchasing a home in Seattle demands a much larger investment.

Given that Miami is a small, densely populated city, there’s a high concentration of condo residences in high-rise developments. Miami’s most expensive real estate can be found along the city’s many canals and waterways, as well as by the Atlantic Ocean. Here, you’ll pay a premium for stunning views as well as luxurious resort-style amenities.

Seattle also has its fair share of luxury waterfront properties along the shores of Lake Washington and the Puget Sound. Rather than high-rise towers, you’ll encounter large single-family homes and low-rise condo developments. Away from the water, you’ll find a range of single-family homes of all sizes as well as modern condos and apartments.

Both cities offer a wide selection of architectural styles. Miami is famous for its Art Deco architecture, as well as other mid-century styles, but you’ll also find Mediterranean, modern, and ranch-style homes. In Seattle, you’ll find beautiful Victorian architecture in the city’s oldest neighborhoods as well as Craftsman homes, 1950s bungalows, and Northwest Contemporary Minimalist construction.

Both cities are ideal stomping grounds for those who enjoy an active outdoor lifestyle. There are wonderful parks and green spaces throughout Seattle and Miami, and residents enjoy hiking, jogging, and cycling as well as team sports.

Seattle is home to superb parks like Discovery Park and Seward Park, and the nearby Cascade mountains are an outdoor adventurist’s dream. There’s plenty of water in both cities, with boating and watersports among the favorite local pastimes. Miami has Seattle beat when it comes to beaches, though. There are miles of gorgeous sugar-white sand here, framed by the warm, aquamarine waters of the Atlantic Ocean.

Both Seattle and Miami offer endless shopping opportunities, ranging from large luxury malls to unique neighborhood boutiques. Miami is home to a world-famous dining scene, and there’s everything on offer from refined fusion in a cutting-edge restaurant to comfort food in a favorite local eatery. Seattle also offers food from every corner of the globe, with Asian cuisine featuring prominently. Fresh seafood is a big deal in Seattle, and the world-famous Pike Place Market is ground zero for fish and shellfish.

If there’s one thing everyone knows about Miami, it’s that the city’s nightlife scene is unequaled anywhere. Some of the most famous and exclusive nightclubs in the world are located in South Beach. Bars, clubs, and sidewalk cafes line Ocean Drive and Washington Avenue, and the partying continues long into the early hours. Other Miami neighborhoods with top-notch nightlife include the hipster haven of Wynwood, and the buzzing, exciting streets of Brickell, which are filled with elegant cocktail lounges, bustling sidewalk cafes, and an ever-expanding collection of awesome restaurants.

Seattle can’t really compete with Miami’s nightlife, but there’s a buzzing energy here after dark. Downtown and the adjacent Belltown are filled with bars, live music venues, and nightclubs, and the streets are always lively and vibrant. Further north, the historic neighborhood of Ballard offers restaurants and bars as well as too many brewpubs to count.

Sports fans will be happy to call either of these cities home. Miami is home to the Miami Dolphins (NFL), Miami Marlins (MLB), and David Beckham’s Inter Miami (MLS). Seattle residents are more passionate than most when it comes to sports. The Seattle Seahawks are the NFL team here, while the Seattle Mariners play Major League baseball. Some of the biggest crowds turn out to cheer on the Seattle Sounders, who have been playing in the MLS since 2009.

If you’re thinking about moving to a new city, the weather and climate can have a big impact on your decision. Seattle and Miami really couldn’t be more different in this regard. Miami has long, hot summers and although there are frequent rainstorms and ocean breezes, the high humidity can feel suffocating at times.

Summer in Seattle is a more restrained affair, with temperatures rarely rising above the high 70s. That said, the weather is notoriously fickle in this part of the world and cloudy days are common during the summer months. On the flip side, winter in Miami is warm and pleasant, whereas Seattle experiences long, rainy, and dark winters, with snowfall most common in January.

Extreme weather is possible in either city. Hurricanes are an annual possibility in Miami, while smoke from regional wildfires is becoming more common during summer in Seattle with every passing year. Weather-related property damage is a genuine concern for Miami residents, while summer air pollution can be a serious health risk for Seattleites.

Miami is a coastal city, and there are miles of beautiful white sand beaches to explore, as well as an extensive network of picturesque canals and waterways. Seattle, too, is surrounded by water, with lakes, inlets, and the Puget Sound visible from just about everywhere in the city. Whereas Miami is a flat city, Seattle is defined, in part, by its hilly terrain. This makes for incredible views, but walking and even driving in the steepest parts of the city can be challenging!

Both Seattle and Miami have thriving, diversified economies, which are the 10th and 11th largest in the United States, respectively.

Tourism is one of Miami’s largest private-sector industries, with the city’s hospitality and cruise ship sectors employing thousands of local residents. PortMiami is one of the largest ports in the nation. As well as being the “Cruise Capital of the World”, PortMiami is an extremely busy cargo hub.

Seattle is also home to one of the busiest ports in the United States. The Port of Seattle is a major gateway for trade with Asia, making it the 8th largest port in the country when measured by container capacity. Seattle is known for being a high-tech hub, and many of the largest tech companies have a substantial presence in the city, including Google, Microsoft, Facebook, and Amazon.

Although Boeing moved its headquarters from Seattle to Chicago, it maintains a sizable presence in the city and remains the largest private employer in the Puget Sound region.

It’s almost impossible to pick a “best city” when it comes to Seattle vs Miami. As we’ve seen, both cities are exciting and diverse, and both have their pros and cons.

Seattle will appeal to those who want to live in a dynamic and vibrant city that provides lots of opportunities in the high-tech sector. Although the cost of housing in Seattle is much greater, many will find that it’s worth it to live in a beautiful, temperate place with so many outdoor activities on offer.

Miami is more likely to appeal to those who want to be close to the beach and like to have access to world-class partying and an eclectic dining culture. Although it’s the more affordable city to live in, the humidity can be a challenge. However, the weather in winter just couldn’t be better, and many will find the summer mugginess a small price to pay to live in a culturally rich and engaging city.