Seattle restaurants have incredibly fresh seafood and other delicious treats. The Pacific and Northwest are known for their blend of innovative seafood recipes and Asian influence. With so much water, great views are often a given. Seattle has hundreds of amazing restaurants spread across the city which feature the flavors and design of the Northwest. SeattleTravel publishes our annual list of Seattle’s Top Ten Best restaurants based on multiple selective criteria. Everyone has their favorite restaurants and we strongly believe that these ten are the best in a highly competitive field. Enjoy and send your feedback…. 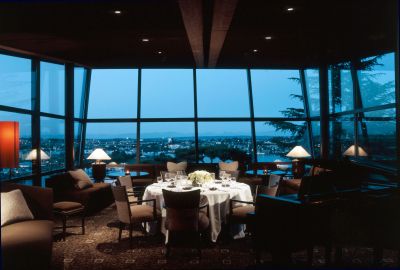 is well known as one of Seattle’s long-time famous, “premier” restaurants. Featured in publications from the Wall Street Journal, Gourmet Magazine, to CBS. Saveur Magazine heralds Canlis original salad as “one of the best 100 dishes in America.” The Birthplace of Northwest Cuisine.

Canlis was established in 1950 and has defined contemporary Northwest cuisine. With a focus on the freshest offerings for every season, the chefs of Canlis allow the ingredients of Washington to speak for themselves. Canlis has been the most celebrated restaurant in Seattle since 1950 and remains so today.

offers an amazing selection of Italian fresh foods based on the cuisine of the Pacific Northwest. Spinasse is acclaimed for its interpretation of the traditional cuisine of the Piedmont region of Northern Italy.Chef Jason Stratton and his cooking team create simple, refined dishes grounded in authentic techniques from the Piedmont region. Spinasse incorporates the products of artisans and small farmers from the Pacific Northwest. Based on the strength and originality of these dishes, Chef Jason Stratton has been selected as one of Food and Wine’s Best New Chefs for 2010. Spinasse is renowned for handmade Italian pastas and seasonally inspired dishes and desserts, alongside a carefully chosen wine list. The dining room reflects an authentic, rustic, classicality found in Piedmontese trattorias and the small bar features a birds-eye view of our open kitchen (special Chef meals available).Spinasse is open six days a week and is located on 14th St. in the Capitol Hill neighborhood of Seattle, between Pike and Pine St. Open: Wednesdays, Thursdays, Sundays & Mondays: 5-10pm, Fridays & Saturdays: 5-11pm, closed on Tuesdays. Address: 1531 14th Avenue E., Seattle, WA 98122 Phone: 206.251.7673

heralds the wave of “small plate” dining to share with friends. The Times calls it one of the city’s most exotic and refreshing takes on happy hour food. This unique Capitol Hill restaurant brings a new and unusual style of dining to the Northwest. Poppy’s inspiration comes from the “thali,” a platter served to each guest holding a variety of small dishes. The menu borrows the idea of the thali to present Chef Jerry’s own style of Northwest cooking, highlighting seasonal ingredients, fresh herbs, and spices. It’s a modern northwest tasting menu served all at once. You pay a fixed fee (around $35-$40) for a selection of many small plates. The food is original with incredible flavors and has been heralded in numerous national “foodie” magazines. Located at 622 Broadway East at Roy Phone 206-324-1108 Hours Monday-Thursday, & Sunday dinners 530-10 and Fri/Sat 530-11.

restaurant is elegant, contemporary, fresh, and executed with care and confidence. The restaurant brings together the culinary talents of one of the Northwest’s emerging chefs with the contemporary design of Heliotrope architects. Spring Hill offers innovative regional northwest foods that are fresh, flavorful and simple. Spring Hill is committed to utilizing local ingredients from northwest farmers and fishermen. Example Price Fixe meals include your choice of Halibut with king clams and mussels or Black Angus hanger steak with carmelized onions for $38 including a beet salad and bourbon cake or poached pear. Located at 4437 California Avenue Southwest in West Seattle. Hours Mon-Sat 545pm to 10pm. Spring Hill has been featured in Sunset Magazine, the New York Times Magazine, numerous Seattle lifestyle newspapers and magazines, and Bon Appetit.

menu is best described as the cuisine of the Pacific Northwest refined by a French accent. The “Chef in the Hat” (see his story below) provides the French accent while the bounty of the Pacific Northwest provides the raw ingredients. Rovers does not serve classical French food. Instead, they use traditional French techniques to tease out the many flavors of the region’s best ingredients. Chef Thierry Rautureau is passionate about sourcing ingredients that are local, sustainable, organic, and seasonal.

Set menus include: a Bistro Menu for $59, a Menu Dégustation for $99, and a Grand Menu Dégustation for $135. A Vegetarian Menu Dégustation for $85 is available by request daily. Hailing from the Muscadet region of France, Thierry Rautureau is the James Beard award-winning chef and owner of Rover’s and Luc restaurants and has a unique background history. Raised on a farm in France, Rautureau helped his mother prepare meals for the family. From an early age he learned to appreciate seasonal cooking and utilizing fresh, homegrown ingredients. With six years of traditional French culinary training behind him, Rautureau headed for the United States and worked with Jean Claude Poilevey at La Fontaine in Chicago. During a visit to see friends in Seattle, Thierry Rautureau, known as the Chef in the Hat due to his ever-present fedora, dined at Rover’s and discovered the restaurant was for sale. Charmed by the converted house tucked away in a private courtyard, and inspired by the ingredients found in the Pacific Northwest, Rautureau moved to Seattle and opened Rover’s in August 1987. Chef Rautureau’s vision is a warm, comfortable dining environment, similar to dining at a friend’s house. Rover’s is known for its dedication to professional service, exquisite wine and food, and an intimate environment. Located at 2808 East Madison in Seattle Phone: 206-325-7442

has been long known as the best Thai and Satay bar (grilled meats) restaurant in Seattle – it’s one of the most popular restaurants in the region. Now with a second location in Bellevue’s premier Bravern shopping mall – Wild Ginger is top quality Thai food with style. Adapted from the street foods of Asia, Wild Ginger offers tasty small dishes to share family style. It’s an upscale dining experience that leverages the fresh ingredients of the Pacific Northwest. Wild Ginger is a James Beard Award winning restaurant and has been reviewed or featured in top ten lists of national publications, including Gourmet, Bon Appetit, Atlantic Monthly, People, Conde Nast Traveler, Money Magazine, Forbes RYI and The New York Times. The well-respected Zagat Guide has noted Wild Ginger as Seattle’s most popular restaurant since 1997. 1401 3rd Avenue in downtown Seattle or 11020 NE 6th in Bellevue’s Bravern shopping mall.

At the Metropolitan Grill, the focus is on the prime beef. The Met has built its reputation on the classics – filet mignon, New York peppercorn steak, delmonico, porterhouse and chateaubriand, carved tableside. Steaks are seared over the high heat of the “Iron Wood of the World,” imported mesquite charcoal, ensuring the most tender, juicy steaks available. The Chefs personally select each cut that is served to guests, choosing corn-fed USDA prime from the Midwest that has been custom dry aged.

The moment you step into the Metropolitan Grill, you know you have entered a classic steakhouse. The Met is located in a historic building built in 1903 where guests enter through tall mahogany doors, under the bright green awning, to be greeted by tuxedo clad Maitre D’s. Cuts of beef are showcased in a glass display in the front entryway. Twenty-foot columns reach to the ceiling that is trimmed with original moldings. Tables and railings are adorned with mahogany and brass and the booths are plush and oversized. Framed photographs of celebrities, sports heroes and local politicians, all frequent visitors to The Met, line the walls.

The elegant 50-foot black marble bar is a favorite gathering place. Local stockbrokers, bankers and sports celebrities mingle under televisions that keep guests up to date on the stock market’s ups and downs and the fate of Seattle’s sports teams. Martinis are the specialty and the Smoky Met Martini, the reigning champion of Seattle’s Martini Classic, is a favorite.