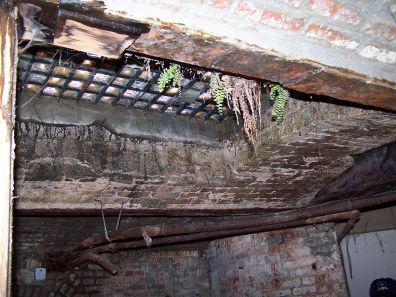 Amazing, weathered ceiling to the street above…

Visit the spooky city that lies beneath Seattle’s present street level where you’ll learn how the Underground was created. The subterranean walkways are dry, but the history sure isn’t! Learn about Seattle’s very colorful past; how our Founding Fathers’ squabbling led to Seattle’s complicated street system, and how the solutions to our unique plumbing problems affected the town’s elevation.

Relax in Doc Maynard’s, a restored 1890’s public house (pub and nightclub), where you’ll hear the first part of the tour. From there, your guide will lead you along the sidewalks of Pioneer Square and into the areas below, which have been vacant since 1907.

The tour lasts 1-1/2 hours and is offered daily, year-round (check for seasonal dates and holidays).

• Operates (click for schedule / price info): Most days of the year; public tour times vary according to season. 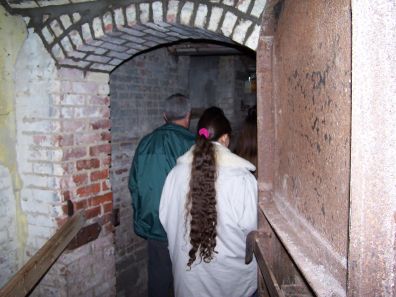 Seattle’s underground tour is a unique activity on your visit…

Before Microsoft, the rock of this Northwest city’s economy was sewing. The Gold Rush of 1897 turned Seattle into the major supply port for prospectors heading north and the population soared. There appeared to be an inordinate number of young women, without visible means of support, living in the down

town area– they listed their profession as “seamstress.” Nudge-nudge, wink-wink.

Rather than run the women out of town, Seattle’s political leaders decided to raise considerable revenue by taxing each prostitute $10 per month. Said the tour guide, “A stitch in time is two bucks.” In 1889, a fire started by an overturned pot of glue spread rapidly through the downtown’s wooden structures. Fire hoses lost pressure, and a human chain of seawater buckets reaching up from the coast was disbanded when stores of ammo in a hardware store began exploding. In the end, 33 blocks burned down.

Reconstruction was very quick and not very uncoordinated. Buildings were erected before city officials could implement their plan to elevate street levels nearest the water. Officials ordered the streets raised. Stone walls were erected on each side of the roadways and filled with whatever materials were available — fire debris, dirt from the hillsides, garbage, even dead horses — before the surfacing work. 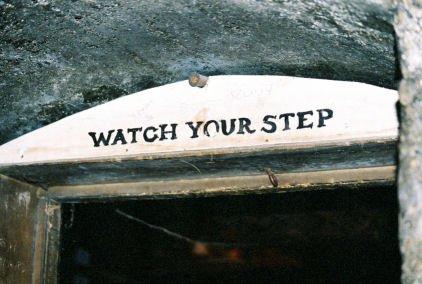 So for about a decade this was the situation: Many downtown Seattle streets were up to 32 feet higher than the buildings’ ground floors and the sidewalks around those buildings. Ladders were placed at intersections so people could climb up from one sidewalk, cross the street, and climb down to another sidewalk. As Airi pointed out, that was not an especially flattering way for ladies in long dresses to walk about with their shopping bags. It also wasn’t a good situation for men on drinking binges, 17 of whom died from falls. Bridges were placed over parts of some sidewalks and, eventually, complete sidewalks covered the old ones, which remained in use and were illuminated by skylights imbedded in the new walkways.

In 1907, a bubonic plague prompted the underground portion of Seattle to be condemned. Only illegitimate business still was conducted there, including a flourishing liquor trade during Prohibition. Rats became an overwhelming problem. To combat the nasty rats, the city took several steps, among them paying 10 cents for each slaughtered rat. Citizens needed only to bring in a rat’s tail for what in today’s currency translates to about $5. Inevitably, some people began breeding rats so they could claim the reward.

The preceding content is an editorial review of the Seattle Underground Tour based on editorial information collected by our organization. Information is updated regularly, so call for exact current schedules.