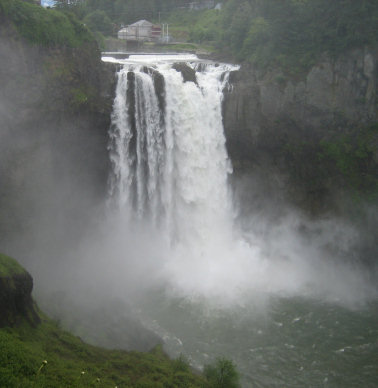 Located just 25 miles outside Seattle – Snoqualmie Falls is one of the United States most stunning waterfalls. The crashing falls is a sight to behold — and also a major source of naturally generated hydro-electric power for the region. You can view the falls from a convenient park area with a platform giving 180 degree views of the waterfall.

The waterfall is a 268 foot, 82 meter wonder on the Snoqualmie River visited by over 1.5 million people per year. The Falls were featured in the popular cult television show “Twin Peaks”. Snoqualmie Falls is a sacred place for Native Americans culture and spirituality.

At the top of Snoqualmie Falls, there is a luxury mountain lodge hotel — the Salish Lodge. Renowned for 4 star service and Northwestern style, the hotel features a famous dining room looking out onto the falls. Consider taking a break at Salish Lodge for a drink or snack after you visit the falls. Salish Lodge is renowned for its multi-course country breakfasts. 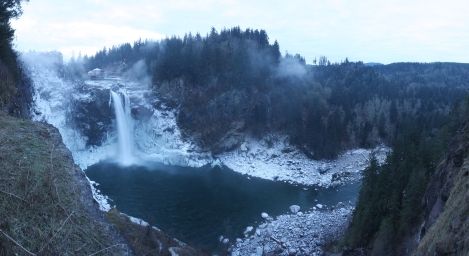 Snoqualmie Falls is very easy to reach from Interstate 90 Eastbound.

The trick is to park on the right side of the road (ie opposite from Salish Lodge Hotel). There is a huge parking lot on the right side with plenty of parking. The dumb tourists all try to park in about 10 spaces right in front of the Falls. There are over 40,000 daily Falls visitors – it’s a losing bet. Use the large lot on the opposite side of the road and enjoy the relaxing walk over a historic bridge — keeping you safe crossing road 202. 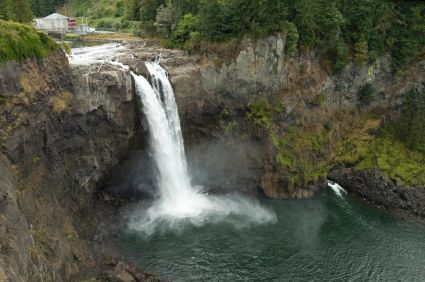 At the falls, you can buy some basic snacks, candy, water, and soda. The next-door Salish Lodge hotel offers upscale dining options which are worth considering if you’d like to enjoy a leisurely meal. There are two restaurant / town areas nearby (around a 1 mile drive) where you can choose from a selection of food from sandwiches to Mexican food or even an upscale steak dinner. The historic town of Snoqualmie offers a number of great food choices including a local Snoqualmie Brewery that features burgers and sandwiches (8032 Falls Avenue); Got Rice Chinese (8406 Railroad), and Gianfranco Italian Restaurant (8150 Railroad Avenue). The railroad museum, store, and historic depot are worth a quick stop when in downtown Snoqualmie.

Around the same distance from the falls is the modern Snoqualmie Ridge / downtown area which offers many restaurant and quick dining options including Ana’s Mexican (7713 Center Blvd), Ming’s Garden Chinese (7730 Center), Talay Thai (7713 Center), Brunello Italian (7708 Center), and iBurger (7726 Center). These restaurants change frequently – but the suburban “downtown” is great to walk around and relax outside of the more touristy areas around Seattle.

Thousands of years ago, when the glaciers receded, they left a fertile plain near Snoqualmie Falls. When Native Americans arrived, they found a bounty of edible bulbs, roots and berries on the prairie. Deer and mountain goats were plentiful.

Though there were no salmon above the falls, the upper Snoqualmie River became a seasonal rendezvous and meeting place as trade among native peoples increased. The Snoqualmie Tribe (a subgroup of the Coast Salish) established a camp at the base of Mount Si. They also established villages at Fall City and Tolt (Carnation).

Snoqualmie is the English pronunciation of “sah-KOH-koh” or “Sdob-dwahibbluh,” a Salish word meaning moon. As a spiritual place, it gave birth to many legends. One tells of “S’Beow” (the beaver), who climbed into the sky to bring trees and fire down to earth. The Native Americans who roamed the valley were known as people of the moon.

Settlers began to arrive in the valley by the early 1850s. Long before, the falls became a tourist destination; pioneer women would edge as close to the falls as they could while friends held on to their dresses to keep them from falling. Jeremiah Borst was the first permanent white settler in the Snoqualmie Valley and is known to some as “the father of the Snoqualmie Valley.”

By 1877, there were several logging operations in the region. In early days, logs were floated over the falls and down the river to Everett and Puget Sound. By 1889, entrepreneurs funded and built a railroad (the Seattle, Lake Shore and Eastern) into the valley, opening up timber resources to the world market.

In 1889, the town of Snoqualmie was platted by Charles Baker, a civil engineer. He also constructed an underground power plant at the falls in the 1890s which still functions today. The power plant resulted in electricity and jobs for locals, and soon a small company town was established at the falls. The second powerhouse was constructed in 1911.