The Seattle Aquarium is a great diversion – especially for families on a rainy day. The aquarium is right on the waterfront and actually is part of the waterway. It’s newly renovated with a ton of great exhibits to keep your kids amused. Seattle’s Aquarium focuses on the fish life of Puget Sound. The exhibits include a variety of fish, animals, and birds that live near the waterfront. The exhibits are presented in a simulated grotto that resembles a sea cave. A mountain display simulates a cascading stream from Puget Sound to the creek’s headwaters. There is also a salmon hatchery, fish ladder, and a glass roofed aquarium where you can see fish above. Favorite attractions include sea lions and sea otters.

Hours: 9:30am-5pm daily. Exhibits close at 6pm. Tip: There are very few people in the aquarium from 5pm-6pm — it’s a great time to stay until the closing. Open on ALL holidays, but limited hours during holidays.

Some of the major areas you should see at the aquarium and our recommendations are below:

Our group had a great time viewing the swimming sea otters and playful sea lions. The Seattle Aquarium was located very close to our hotel in downtown Seattle and we had a fun walk down to the waterfront. The aquarium is built on a pier over the water with many exhibits for kids. Our favorite section was the octopus and jelly fish in a tank that you could see close up. The octopus was gigantic!

A relaxing section of the Seattle Aquarium is the “tank” where you can sit and watch many different kinds of fish and sea creatures swim by. The dark area is peaceful and relaxing. 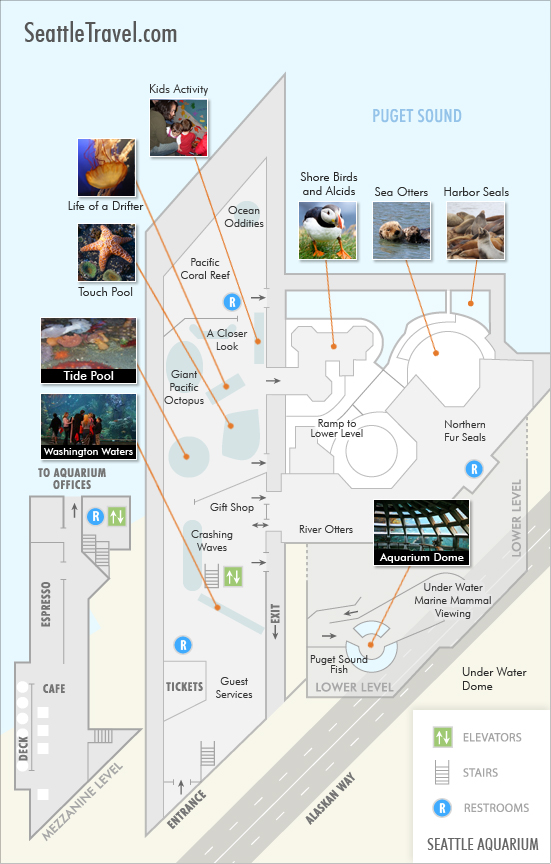