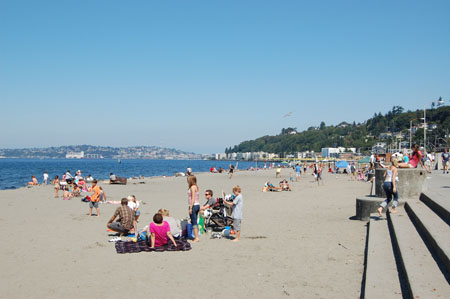 West Seattle is an oft overlooked part of Seattle that offers one of the few destination beaches on Puget Sound. Alki Beach has a two and a half mile long pedestrian walkway, and in the summer is populated by beach volleyball players, sun worshipers, and beachcombers. Most of the beaches on Puget Sound are covered in rock and shells, but on Alki you can get sand between your toes, get some exercise, learn about Seattle’s earliest settlers, and take in a great view of the Seattle skyline.

West Seattle juts out into Elliot Bay directly West of downtown Seattle. It can be easily reached by car via the West Seattle Bridge. From downtown Seattle, follow the signs and find your way to I5 South. Take the exit for West Seattle. Once across the bridge, turn right onto Harbor Ave SW, and this will lead you around the tip of Duwamish Head, and onto Alki point. Parking can be a bit dicey on the weekend, but with patience you will probably find street parking not too far from the main strip along Alki Ave SW. During the summer, leave the car behind and take Metro’s water taxi. The Taxi leaves from a location between piers 55 and 56, and for two dollars (each way) gives you a twelve minute ride across the bay. At Sea Crest Park, the taxi’s West Seattle terminus, you will find Metro’s Free DART shuttle is perfectly timed to pick you up and take you to Alki Beach or to West Seattle Junction.

The Denny party, Seattle’s first white settlers, arrived on Alki Beach in 1851. They were helped through their first winter by a band of the Duwamish people, led by Chief Seattle. The settlers named the area New York-Alki. Alki is a native word meaning “by and by”, and the settlers chose it to reflect their hope that the new settlement would grow to achieve the size and importance of New York City. After one winter camped on the beach, most of the party moved across Elliot Bay, to the less exposed shores of Seattle’s current waterfront.

As early as 1888, there was a ferry from downtown Seattle to West Seattle – it was Seattle’s first bedroom community, though for a time West Seattle had its own thriving timber industry. In 1907, the area was officially annexed to Seattle. That same year, Luna Park, an amusement park that billed itself as the “Coney Island of the West” opened on Duwamish head, at the Northern tip of Alki beach. Though the park was open only until 1913, it’s legacy is still very much a part of Seattle history, and the idea of rebuilding it surfaces every few years. While in operation, the park’s lights could be seen from downtown Seattle; today people go to the Luna Park Seawall for the views of downtown Seattle. 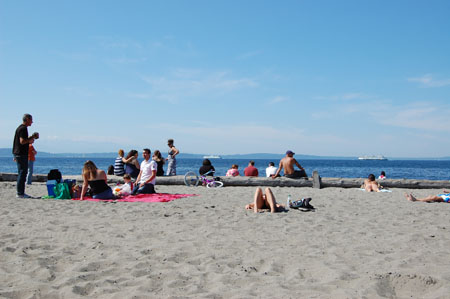 Alki Beach Park – 2.5 miles of sandy beach, with a great seawall for walking and people watching. The park runs from Duwamish head to Alki Point.

Second only to Green Lake in Seattle as the place to see and be seen participating in something athletic, Alki beach provides great people watching, as well as sand to relax on, and hopefully some sun to bask in. This maybe the only place in Seattle where you will see the natives in bathing suits. The water is cold, but on a hot August day, it can’t be beat. A great place to let the kids burn off energy, and to enjoy walking, rollerblading, beach volleyball, or just eating fish and chips are watching others burn calories. Here you can see an obelisk commemorating the arrival on the Denny party, and a replica of the Statue of Liberty, meant to remind all that Alki was once known as New York -Alki. 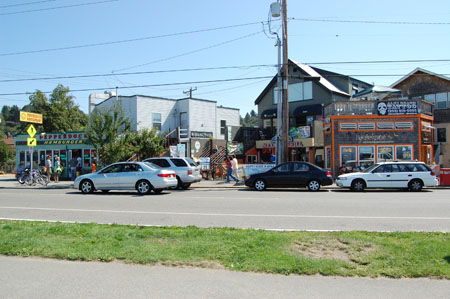 Spuds has been serving fish and chips on Alki since 1935. Although business was sold to Seattle’s fast fish conglomerate, Ivar’s, a few years back, the name and the menu have remained the same. Locals grumble that the fish and chips are not what they used to be, but on a nice summer day, the line can still reach around the block. Get yours to go, and walk across the street to the beach for a picnic. 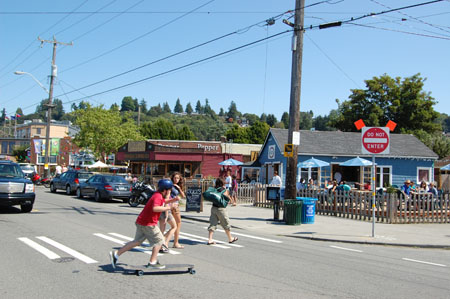 Salty’s is something of a Northwest institution. The view is spectacular, and the romantic atmosphere can’t be beat. This is the only restaurant in town with a view of the Seattle skyline from the SW side, and they charge accordingly. It is a favorite destination for couples and those celebrating special occasions. As you might guess from the name, they specialize in seafood and it rarely disappoints. On Saturday and Sunday mornings, Salty’s offers a great brunch to start the day. From Sea Crest park, where the water taxi docks the restaurant is less than a block to the south along Harbor Ave SW. 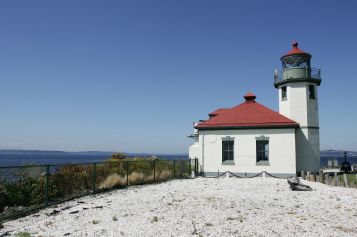 The Alki point lighthouse is one of eight lighthouses on the Puget Sound open to the public. Built in 1913 and still maintained by the Coast Guard, the lighthouse has been fully automated since 1984. Inside the house, you can see old instruments, photographs, and charts of Puget Sound. The view from the top isn’t anything spectacular, but lighthouse buffs will no doubt enjoy it, and others will appreciate the immaculately maintained grounds. Tours are on hold in 2020.  Generally during normal times of the world…. , tours are offered most Sunday afternoons from Memorial Day weekend through Labor Day weekend.  The tours are provided by members of the Coast Guard Auxiliary from the Greater Seattle area. Get details here

The museum sits one block south of Alki beach and is run by the West Seattle Historical society. The museum is meant to honor the Denny party, who landed on Alki beach in 1851 and also the heritage of the Duwamish people, who were ultimately displaced by these settlers. The building, which dates to the turn of the last century was once the carriage house on the estate of a logging family. A voluntary admission donation is requested. (206) 938-5293

To get to West Seattle Junction by car, from Alki turn south onto California Ave, which intersects Harbor Ave SW, just south of Duwamish Head. When you reach the intersection of SW Alaska and California Ave, you have arrived. The junction, named for the two street car lines that once crossed here, is the southern terminus for the DART shuttle. The neighborhood, home to restaurants, coffee shops, books stores and other shops, is popular with both West Seattleites and the neighbors from across the water. Don’t miss Easy Street Records, with it’s great, if tiny, cafe (4559 California Ave S.W. ), or the ArtsWest Gallery (4711 California Ave SW ). On Sunday mornings from 10am – 2pm the West Seattle’s farmer’s market is held here.

If you’re looking to save money while traveling, don’t miss our guide to Seatac parking at Seattle’s airport.