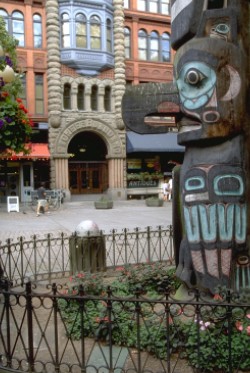 Pioneer Square’s historic district of Seattle offers a wealth of art galleries, bookstores, antique shops, cool restaurants, and buzzing nightclubs within easy walking (or free bus) distance of most downtown Seattle hotels. The cobblestone streets and horse-drawn carriages are a reminder of life a century ago.

Pioneer Square is Seattle’s oldest neighborhood, adjacent to the new, massive sports stadiums for the Seattle Mariners and Seattle Seahawks. The classic red brick buildings give a warmth to the area not found in most sprawling US suburbias. The term “skid row” originated in Pioneer Square– when timber would be slid down Yesler to a steam powered mill on the Seattle waterfront.

Pioneer Square is the busiest after dark, when dancing, live music, and spicy food shake up the City. The area’s shopping is particularly good for used or classic books and antiques. You should check out the Klondike Gold Rush National Historic Park– a museum telling the story of the gold rush days of the Yukon miners.

Pioneer Square is a ninety acre historic district, devoted to art, history, culture and entertainment. Here you will find a Park Service museum, an observation tower and a vintage streetcar, in addition to many of Seattle’s bookstores, and quite a few art galleries, coffee shops, and restaurants. The bars in the square are very popular for live music, and one cover charge gets you into most of the venues. Every first Thursday of the month there is a free tour of the art galleries held in the early evening.

One word of caution, Pioneer Square is near the city and county courthouses as well as the county jail. Almost every time you walk through the area, you see something or somebody that seems a little off. The area is also popular with the homeless. It’s not a threatening environment, but is definitely one where you are better off staying aware of your surroundings. After dark in particular you should think twice about leaving the 1st Avenue corridor. The folks in the bars are pretty harmless. The same may not always be true up around the bus stops on 2nd and 3rd Avenues.

There really isn’t a square to Pioneer Square. The area sits, from East to West, between 2nd Ave and the Alaskan Way Viaduct, and from South to North, between Columbia St. and King St. Pioneer Square is between downtown proper to the North, and the sports stadiums and International District to the South.

It is easy to get here from the downtown hotels – the square is part of the Seattle Metro ride free zone; any bus traveling south from downtown will get you with in a few blocks. There are a few pay parking lots, and limited street parking is available too. Often the best parking bet is the metered spaces under the viaduct – these parking spots are usually overlooked by all but the locals. Occidental St, which sits between 1st Avenue and 2nd Ave is closed to cars between Washington St. and Jackson St, and forms a pedestrian mall which backs up to many of the galleries and shops. 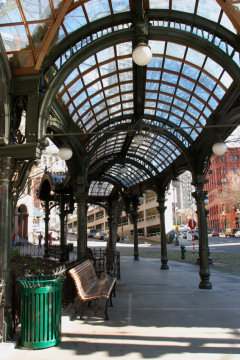 Pioneer Square is Seattle’s second oldest neighborhood; here the city itself took root. The first white settlers in the area landed in what is now West Seattle, across the water at Alki Point in 1851. After a miserable exposed winter, most of the settlers moved, on the advice of Chief Seattle, a Duwamish tribal leader, and began their new settlement on the more sheltered shores of Elliot Bay, in the area that is now Pioneer Square.

Many of the buildings in Pioneer Square date back to the 1890’s. Very little of Seattle’s earlier architecture survived the fire of 1889. The civic leaders of the day took advantage of the fire to raise the streets in Pioneer Square, solving a long standing drainage problem. To get a glimpse of old Seattle take the Underground Tour. Famous for it’s slightly ribald humor, the tour is a Seattle institution itself, dating back to 1972.

Pioneer Square was also shaped by the Yukon Gold Rush of 1897. Seattle successfully sold itself as the gateway to Alaska, and the best place to outfit a gold mining expedition. The merchants thrived, and so did the city. Pioneer Park, created at the triangle where Yestler Way and James St come together at 1st Avenue gained a stolen Alaskan Totem Pole in 1899, (now replaced by one honestly acquired) and the elaborate iron Pergola framed comfort station in 1909, just in time for Seattle’s first World’s Fair, The Alaska-Yukon-Pacific Exhibition. Yestler Way is actually the nation’s original skid row. Named for the way logs were rolled down the hill to the wharf for transport, the expression took on connotations of poverty and vice when hordes of unemployed men camped in the area during the depression.

The area underwent a revival in the late 70’s and early 80’s when historic preservation became a priority in Seattle. Pioneer Square was the city’s first designated historic district and it’s vitality and survival remain a priority today.

The iron pergola that sits in this brick park is a landmark in Seattle. Originally built to greet visitors to the 1909 World’s Fair, it heralded the way into a public comfort station, and sheltered people waiting for the street car. The Pergola was knocked over in 2001 by a wayward truck, but fully refurbished and restored in 2002. The park is also home to a Tlingit totem pole. Just behind the park is the Pioneer Building, headquarters of the Underground Tour.

The only way to get a glimpse of Seattle before the fire that reshaped the city in 1889. The tours started in the 70’s and combine history and humor. The glimpse of the original Seattle is well worth the ten dollar admission price, even if it is a bit cheesy. There are some steep stairways, so wear good walking shoes. The tour doesn’t take reservations, but runs on a first come, first serve basis. Check out the schedule, and plan to buy your tickets at least a half hour in advance in the summer.

Occidental Park: Occidental St, between Washington St and Main St, with a pedestrian walk continuing up Occidental to Jackson St.

Occidental is a pedestrian mall that hasn’t quite taken off. The patio outside the Grand Central bakery is almost always busy during the day, and while the cobblestone street is lined with benches and trees, it is often unpopulated, except during scheduled events. There are several totem poles here, a history exhibit, and the Fallen Firefighters Memorial. In the summer, the Pioneer Square Community Association hosts free concerts every Tuesday at noon. This is a great time to visit the park, and get a sense of what the community envisions for this space.

Part of a series of four Park Service museums dedicated to the Yukon gold rush. This small space is dedicated to the process and the journey involved in panning for gold in Alaska around the turn of the century. Walking tours and an audio visual presentation are available. The park rangers give gold panning demonstrations which are very popular with kids.

Six dollars gets you access to the open air deck on the 35 floor of the Smith Tower. The tower opened in 1914, as was for many years the tallest building on the West Coast. The 35 floor is also home to the Chinese room – furnished and decorated with materials given to L.C. Smith by the Empress of China. The tower itself is still active office space, and was extensively refurbished and remodeled in 1999. The view is not as expansive as that of the Space Needle, but is never crowded, and gives you a strong connection to the history of the city.

A great place to bring a cup of coffee, or your lunch, and very popular with area office workers at lunchtime for just that reason. Benches, tables and potted plants surround a beautiful 22 foot tall man made waterfall. An urban oasis, built to commemorate the spot where UPS (United Parcel Service) was founded in 1907.

First Thursday: For the Gallery Walk, meet at 6 pm at the corner of Occidental St and Main St.

The first Thursday of every month the galleries in Pioneer Square stay open late and offer a tour to introduce their new shows to the public. Often the artists are on site for these events, and the restaurants and shops will offer specials as well. In the afternoons preceding the Gallery Walk, Art in the Park is held in Occidental Park. Local arts and crafts can be purchased from a variety of vendors, and often live music can be heard. If you happen to be in Seattle on a first Thursday, this is well worth checking out.

This bakery is said to be the one that brought artesian bread to Seattle. The loaves are hand formed and the baking is done in hearth ovens. The bread is outstanding, as are the sandwiches and baked goods. On a nice day, enjoy your lunch outside on the patio, adjacent to Occidental Park.

A great casual coffee house. Order you drinks and snacks upstairs, and take them downstairs into the expansive below ground seating area.

A coffee house and art gallery with lots of warm wood, expansive space and great coffee and pastries. The goal at Zeitgeist is to conjure up a European coffeehouse, a space for conversation, interaction and community creation. Zeitgeist participates in the first Thursday art walk, and is very popular with the Seattle arts community.

Portions of this article contributed by Lynn Marshall – Seattle, Washington